Budget 2023: Why you should invest in ELSS throughout the year, and not make a year-end dash

India has traditionally been a savings economy.

Between the financial years 2005 and 2014, about 28 per cent of the investments in equity-linked savings schemes (ELSS) happened in March alone. Since FY2014 there has been an improvement in the trend with such investments being made in the last 3 months of the fiscal year.

Procrastination is universal and happens in the mutual fund (MF) industry as well. In March every year, there is a rush to invest in tax-saving funds as the financial year is coming to an end. It is interesting to observe that 50 per cent of the investments in ELSS happens in the last quarter. The last quarter is already upon us, so it is useful to go through some basics of ELSS, popularly known as tax-saving MF schemes.

India has traditionally been a savings economy. This is borne out in not only the trend in savings over the decades but also in the way Indian investors view investments, especially those that carry tax exemptions.

The total assets under management (AUM) of the ELSS category are Rs 1.50 lakh crore plus, which is roughly 4 per cent of the total mutual fund industry’s AUM and is rising. There were 40 ELSS in the industry with 1.44 crore as on October 31, 2022.

Also read | Did you know that your tax benefits can vanish later?

There was a sudden jump in ELSS gross sales when the limit under 80C was raised to Rs 1.5 lakh in FY2015 as shown in the table: 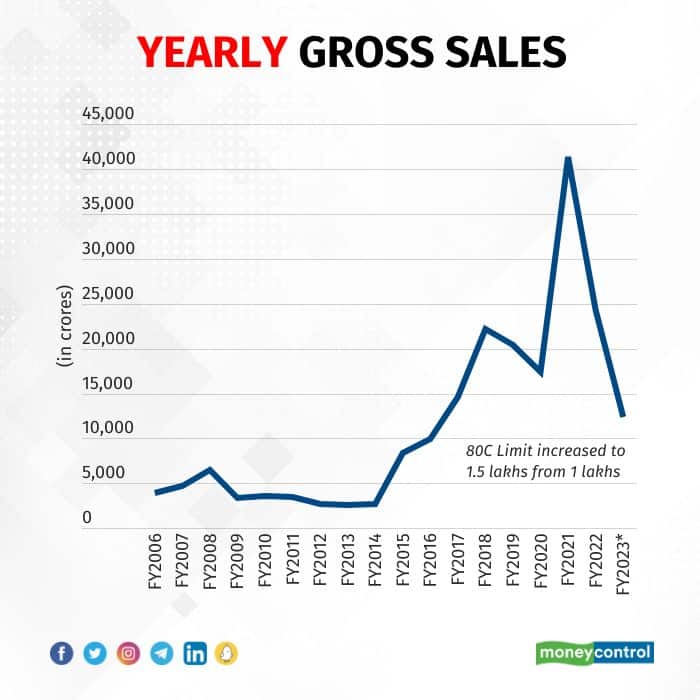 How ELSS investments went up after Section 80C limits were enhanced to Rs 1.5 lakh. Source: AMFI Non-market-linked investment options do not have volatility. Hence investing any time in them doesn’t make much difference.

A majority of investors still buy tax-saving funds in the last quarter of a financial year. Source: AMFI Hence, investing in a systematic way throughout the financial year in ELSS, rather than rushing to invest in March or January-March quarter, can help investors lower volatility due to rupee cost averaging and investing in funds across various market cycles.

SIP can be done daily, weekly, monthly, quarterly, or on a biannual basis. Periodic investment is a great solution. For salaried investors, it will also help to balance out their monthly income rather than investing lumpsum in ELSS funds.

Other than being a great tax-saving investment, ELSS has a minimum lock-in period of 3 years as compared to 5 or more years for other tax-saving options.

Also, the gains in ELSS are only partially taxable (long-term capital gains on equity or equity mutual funds up to Rs 1 lakh is tax-free). In comparison, gains on other 80C investment options such as tax savings FD and NSC are fully taxable, and partially taxable on NPS.

To sum up, investors should change the way they invest or view ELSS as an investment option. Periodic systematic investment in an ELSS over the years – 10 years plus, is a boon and not a ritual to be followed only in the tax season – be it January-March quarter or March month.
Ashish Patil is Head - Product & Strategy, LIC Mutual Fund Asset Management Ltd.
Tags: #Budget 2023 #budget 2023-24 #invest #investment #personal finance #Tax #Taxation #union budget 2023
first published: Jan 6, 2023 09:16 am