Trade Spotlight | What should you do with Tata Motors, Samvardhana Motherson, Zydus Lifesciences on Wednesday?

The market has largely been volatile and trading within the range of 17,750-18,300 on the Nifty50 for over a couple of weeks. On January 10, the benchmark indices wiped out more than half of previous day's gains and closed with 1 percent loss led largely by banking and financial services, technology and metal stocks.

The BSE Sensex fell more than 600 points to 60,115, while the Nifty50 shed 187 points to 17,914 and formed long bearish candle which, to some extent, resembles Bearish Engulfing kind of pattern formation on the daily charts, indicating bears ruling over Dalal Street.

The broader markets also traded in line with benchmarks with the Nifty Midcap 100 and Smallcap 100 indices declining half a percent and six-tenth of a percent respectively on weak breadth.

Stocks that bucked the trend on Tuesday included Tata Motors, which was the biggest outperformer among Nifty50 stocks, climbing 6 percent to Rs 412.90, the highest closing level since December 19, 2022 and formed long bullish candle on the daily charts with significantly higher volumes and making higher high higher low formation for second straight session.

Zydus Lifesciences was also in action, climbing 3 percent to Rs 457, the highest closing level since January 5, 2022 and formed strong bullish candle on the daily charts with healthy volumes, making higher high higher low for sixth consecutive session. The stock on January 5 this year, has seen a breakout of long downward sloping resistance trend line adjoining June 11, 2021 and November 10, 2022. Also there was a breakout of horizontal resistance trend line adjoining November 11, 2022 and January 9, 2023.

Here's what Vaishali Parekh of Prabhudas Lilladher recommends investors should do with these stocks when the market resumes trading today:

The stock has maintained a strong support zone near Rs 375-380 levels and has recently given a decent pullback to improve the bias moving past the significant 50-day EMA (exponential moving average) level of Rs 408 to strengthen the trend. The bias has turned positive with a strong bullish positive candle indication and is expected to rise further with initial targets of Rs 435-440 levels.

The RSI (relative strength index) has turned up from the highly oversold zone and indicated a trend reversal to signal a buy. Further ahead a decisive move past the important 200DMA (daily moving average) level of Rs 427, would further trigger for fresh upward move and can anticipate for Rs 480-490 zone. The near term support would be near Rs 380 zone. 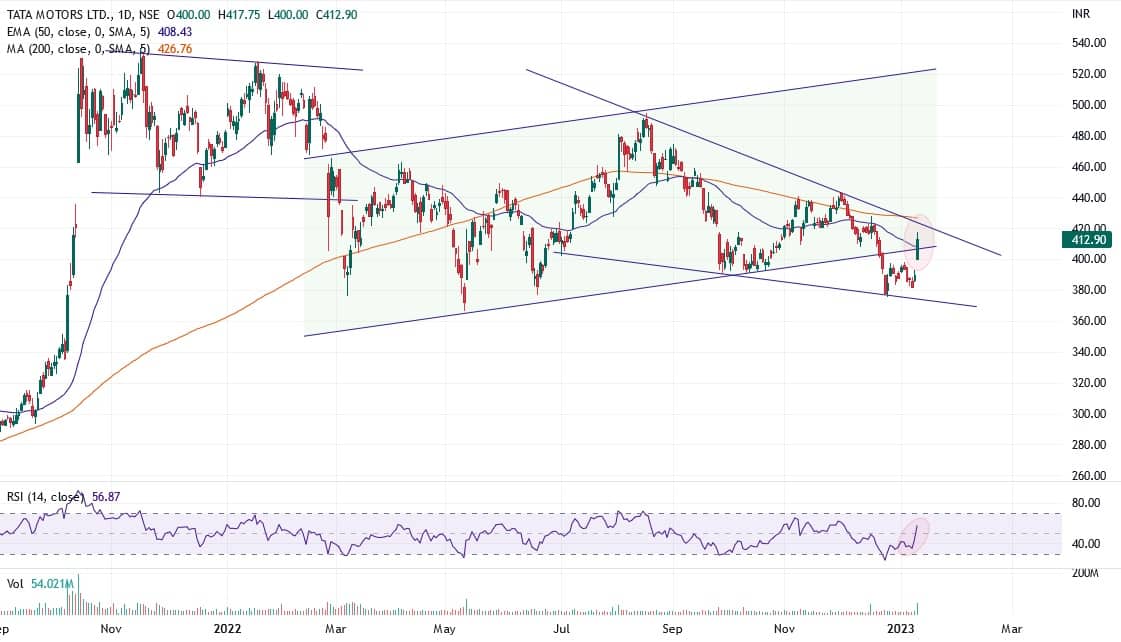 The stock after making a higher bottom formation pattern on the daily chart near Rs 390 level has gradually picked up and moving past the significant 50EMA level of Rs 408 has improved the bias and witnessed a decent rally with currently indicating a breakout above the trendline resistance of Rs 450 level to anticipate for further upside move.

The chart looks attractive with a strong trend maintained with next target expected at Rs 490-500 levels. The near term support would be Rs 435 zone. The stock after a short consolidation phase near Rs 75-76 zone has given a breakout to move ahead and indicating strength has scope for further upward move in the coming days.

A decisive move above the significant 200DMA level of Rs 79.60 would further strengthen the trend and can trigger for fresh further upward move with targets anticipated at around Rs 86-89 levels. The near term support zone would be Rs 75, below which the trend can turn little bit weak. Disclaimer: The views and investment tips expressed by investment experts on Moneycontrol.com are their own and not those of the website or its management. Moneycontrol.com advises users to check with certified experts before taking any investment decisions.
Sunil Shankar Matkar
Tags: #Market Edge #Nifty #Samvardhana Motherson International #Sensex #Stocks Views #Tata Motors #Technicals #Trade Spotlight #Zydus Lifesciences
first published: Jan 11, 2023 06:31 am