The last date for filing your tax return is December 31. Here’s what’ll happen if you don’t

If you’ve missed the July 31 deadline to file your ITR, you can file a belated return by December 31. Else, you may have to pay higher penalties and face heightened scrutiny.

If you haven’t yet filed your income tax return (ITR) for assessment year (AY) 2022-23, don’t start your new year’s eve celebrations just yet. There’s work to do.

December 31 is the last date to file your belated tax return, so your deadline is right around the corner. If you don’t, there are severe consequences.

What is a belated Income Tax return?
As specified under section 139 (1) of the Income Tax Act, 1961, the due date for filing the ITR is usually July 31 of the relevant AY for all assesses other than a company, a person whose accounts are required to be audited, and a few others specified in the section.

So, for most individuals who had income from salaries, small businesses, and professionals, the due date for filing the ITR for financial year (FY) 2021-22 was July 31, 2022.

But a belated return is not similar to a regular return filed within the due date (July 31). Besides other limitations, like the carry forward of losses being disallowed, it also attracts late filing fees under section 234 F of the Act. Late filing fees of Rs 5,000 will be charged for the delay in filing returns if the total income to be reported exceeds Rs 5 lakh. If the total income of the person is less than Rs 5 lakh, then the fee payable is up to Rs 1,000. 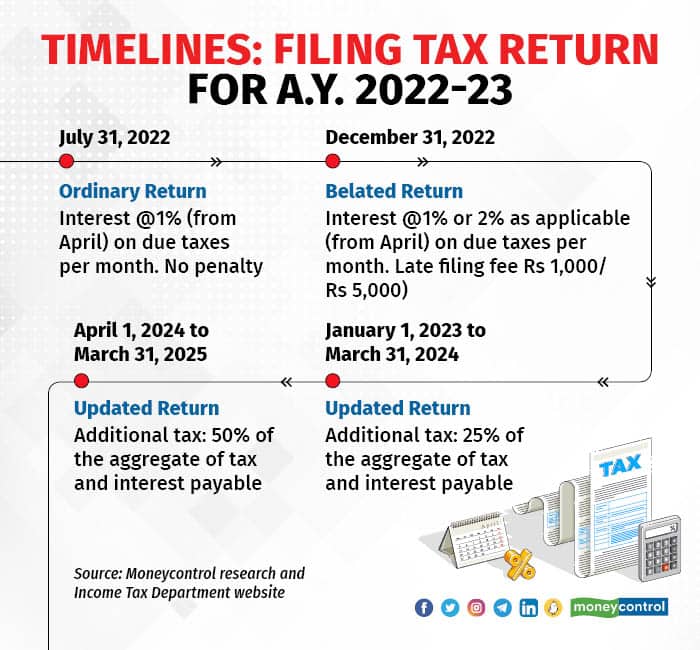 There will be no late filing fee, even after the due date, in case you are filing a return voluntarily and are not required to file an ITR mandatorily. For instance; if your income is below the basic exemption limit, i.e., Rs 2.5 lakh for individuals below the age of 60, Rs 3 lakh for those between the age of 60 and 80, and Rs 5 lakh for people above 80 years, you are not mandatorily required to file an ITR.

The other option is to file an updated return, but that has its own limitations. Let’s find out what these are.

Request to the assessing officer
“If one misses the deadline to file a belated return, because of "genuine reasons," then one may file a condonation of delay request under section 119 and ask the income tax authorities to condone the delay stating the reason for missing the deadline,” says Vivek Jalan, Partner, Tax Connect Advisory, a multi-disciplinary tax consultancy firm.

But whether to allow to file the return or not will depend on the discretion of the IT department. “A liberal view on condoning the delay must be taken by the office considering the discretionary meaning thereof and legal conspectus attending thereto. For instance, in the case of an individual, if it can be proved that there was a delay due to illness, then the delay should ideally be condoned,” added Jalan.

Missed the July 31 deadline? The taxman can still send you a notice
The IT department can send a notice, asking any person who has not furnished a return or a belated return of income within the time period, to file the return.

“Over the past few years, the IT department has been using the latest technological tools, and with the digitisation of data, it has become quite easy to identify non-filers and initiate proceedings against them,” said Yeeshu Sehgal, Head of Tax Market, AKM Global, a tax and consulting firm.

Under section 142 (1), the Assessing Officer (AO) can issue a notice asking the taxpayer to file the ITR if he has not done so. He may also ask the tardy taxpayer to produce reasons for not filing his return on time, or may ask him to produce certain accounts or documents, including a statement of all assets and liabilities of the taxpayer.

The Finance Act, 2022, has inserted subsection 8A in section 139 to enable the filing of an updated return. What does this mean?

The section provides that an updated return can be filed by any person regardless of whether such person has already filed the original, belated, or revised return for the relevant AY or not (subject to certain conditions).

Also, it is to be kept in mind that filing an updated return will entail an additional tax liability of 25 percent or 50 percent, which can be a major issue.

Better file a “Nil” returnMost experts are of the view that it is better to file a “nil” than not file any.

A ‘nil’ ITR is filed to state that you fall below the taxable income threshold and therefore there is “nil” or no tax liability at your end. “Between filing and not filing ITR, the choice is clear — one should file,” said Shailendra Kumar, Chairman, TIOL Knowledge Foundation, a fiscal think tank.

In many cases it is mandatory to file the ITR as per income tax rules, and if you don’t, it can lead to trouble. “The failure to file the ITR may lead to prosecution under section 276 CC of the Income Tax Act,” said Sehgal.

It is worthwhile to mention that it is mandatory for all public and private companies, partnership or Limited Liability Partnership (LLP) firms to file the ITR regardless of whether they have any income or not. Further, it is mandatorily required to be filed even if they have not had a single transaction during the year, Sehgal added.

Besides the rules that make it mandatory to file the ITR, there are other reasons as well to file one’s tax return. “This is not only to comply with the provisions of IT Act, but also for your own trail of your earnings history which may help with your long-term tax planning. As per law, even if you have earned a single rupee, filing of the ITR is obligatory, not the tax payment. Such data also helps the government analyse various aspects of the economy. Further, non-filing also attracts penal provisions which may catch up with you in the future,” added Kumar.

So, if you have not filed your return, take out some time and file it before the year comes to an end.
Ashwini Kumar Sharma
Tags: #Income Tax #personal finance #Tax #Taxation
first published: Dec 28, 2022 08:30 am